My Move From P.C. to Mac

My Move From P.C. to Mac

It was time for a change. The Acer laptop that had served me well (although lately at a snail’s pace) will soon celebrate its sixth year, and I realize its days are 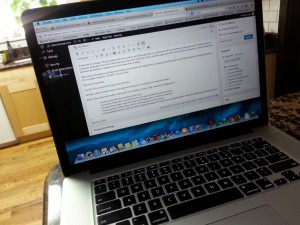 numbered. Although I have all my files backed up in the cloud, I decided to take a proactive approach rather than wait for my business to come to a temporary halt when the hardware I depend on so much comes down crashing.

After much contemplation, grilling representatives at our local mall’s Apple Store, and asking advice both online and off from people who transitioned from P.C.s to Apple computers, I decided to get me a Mac.

That was one week ago.

Overall, so far, so good. But it hasn’t been all roses.

The Mac is slick. No doubt about that. But expect a learning curve to navigate if you decide to make the change.

I’m extremely happy with my decision to buy my Mac. But it’s different than a P.C.

Change is good, but it can also be frustrating.

The challenges I’ve faced during the process of acclimation going from P.C. to Mac include:

The Lay of the Land on a Mac

Finding your stuff on a Mac requires some retraining if you’re coming from the P.C. environment.

Not crazy tough to get used to, but you might find it not altogether intuitive at first.

Gmail and Mac Mail – Not a match made in heaven.

Mail is the Mac equivalent (for lack of a better way of explaining it) of Outlook for P.C.s. While I didn’t have problems connecting both my personal Gmail and Google Apps business Gmail account to it, I discovered a few usability snafus. I like the capability to access my separate personal and professional email inboxes in one place and to easily toggle between them, but starred emails from both accounts get all lumped together in a “flagged” box. I also discovered that unless a particular setting is changed, emails sent through the Mail app appear in Gmail as open drafts even though they successfully reached their recipients. Confused, I proceeded to resend clients email messages they already received.

Ultimately, I decided to disconnect my Gmail accounts from Mail and access them in Chrome as I always have.

Having used Word alone (except for the few instances when clients needed me to craft documents in Google Docs) for many years, I find Apple’s word processing app to function somewhat similar to Word, but not nearly identical to it. Granted, in time I’m sure I’d figure it out, but after four days I downloaded Office for my Mac. As much as I need to use a word processing tool in my business, I couldn’t deal with the unfamiliarity factor. Plus, before I put Office on my Mac, I had to save my Pages documents as Word documents before I shared them to ensure clients could open them. Extra work? No thanks! Word 2011 for Mac works nearly the same as the Word 2010 I have on my P.C.

If You Didn’t Use Keyboard Shortcuts Before, You’ll Need to Start

As a P.C. laptop user, right clicking to perform functions like copy and paste was my way. I could do that using the P.C.’s built-in laptop mouse, but not with the Macbook Pro mouse. Instead, you need to use the Command key to make those sorts of functions happen (for example: Command + C for copy and Command + V for paste). However, I can right click when attaching my USB mouse to my Mac, which is great for when I’m working from my home office work station. For times when I’m mobile, however, I’ll need to familiarize myself with the keyboard shortcuts to work more productively.

As I said earlier, I’m happy with my Macbook Pro. The more I use it, the more I’m understanding why nearly everyone I’ve talked with is a stark, raving fan.

I expect I will be, too, after a little time.

If you’re considering making the investment (at $1999 for the 15″ laptop, it really is an investment) and moving from a P.C. to a Mac, just prepare for a transition that’s not completely seamless.