The Endangered Em Dash – And How You Can Help Save It.

The Endangered Em Dash – And How You Can Help Save It.

I know it’s not nice to pick favorites, but I have. The em dash ( — ) is by far my all-time favorite piece of punctuation. It’s

versatile, adds more emphasis than parentheses and commas, and (when not overused) provides clarity and an unencumbered reading experience.

I revere the em dash.

But people are dissing it. I’m seeing more and more blog posts with two double dashes (–) as a substitute for the em dash.

Enough already. The em dash deserves better than that.

Adding an Em Dash Requires Effort—But So What?

My guess is the em dash-dissing writers are typing their posts in Google Docs or some other online word processing tool, maybe even directly in WordPress. To add a proper em dash, they would need to use the “insert symbol” function and select em dash from the available options. Unlike MS Word, those platforms don’t recognize double dashes following a letter plus a space as the signal to automatically add an em dash.

I understand that can be pain in the @$#. I create my drafts in Google Docs and find it annoying to have to go through the manual process of hand-picking the em dash from the special characters menu whenever I want to add one. But if that’s what it takes to add an em dash, I’m willing to do it.

However, not everyone shares my enthusiasm for the em dash. Fortunately for those folks, there’s an easier way.

By going to the Tools menu and selecting Preferences, you can set up a “substitution” so that when you type a predefined letter or character combination, Google Docs will automatically substitute it with an em dash. 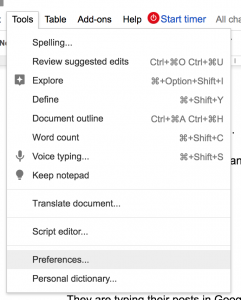 In my Preferences, I’ve set up ++ to automatically change to an em dash. It’s less cumbersome than manually inserting the em dash symbol. 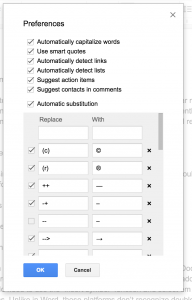 It’s not without some inconvenience, though. Google Docs doesn’t recognize that it should substitute an em dash if there is a letter or character directly behind the ++. So, it requires going back to delete that unwanted space after the em dash (and to do that, you need to forward delete not backspace; otherwise, your em dash will revert to ++).  Still, I’ve found it an efficiency improvement.

You can do the same for en dashes, too. I’ve set up my preferences to make -+ become an en dash.

You might be thinking, “Why didn’t she use — or — as the en and em dash cues?” I admit, that does seem more logical. However, that works only if you have just an em dash preference set up. Unfortunately, things go awry when you set up both an en dash and em dash. Google Docs appears to get confused in that situation. The en dash will work just fine, but the em dash shows up as an en dash plus a single dash. Weird, I know. Anyways, because I want substitutions for both, I use -+ and ++ instead.

Try this tip and spread the word to other bloggers who have been contributing to the demise of the em dash.

4 comments on “The Endangered Em Dash – And How You Can Help Save It.”