I’m a big fan of Twitter. I use it primarily for business, and have met some phenomenal professionals through the 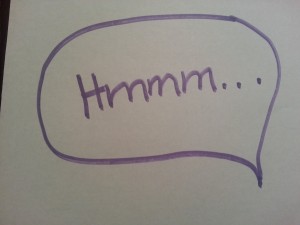 platform. Some of the relationships I’ve built through Twitter have carried over to mutually beneficial offline collaborations. But there are a few things some Twitter users do that don’t make much sense to me.

Retweeting a retweet of your tweets – If I retweet your tweet, a reply to say “thank you” or the gesture of clicking the little star to favorite the RT works just fine. If you want to show appreciation by reciprocating with a RT, it would be nice if you checked my timeline to find a tweet that is RT worthy and is relevant to your audience. Retweeting your own tweet seems a little self-centered. I’m not saying you are. I’m just saying it might seem that way to others.

Tweeting your daily Twitter stats from justunfollow – I’m not sure what purpose this serves. Why would you want to tweet how many people followed and unfollowed you each day? More importantly, why would anyone other than you care?

People who have a gazillion followers, but who only follow back a handful of people – Really? Out of all your thousands of followers, you can only find twenty or thirty who appear interesting? I get it, you want to keep your feed under control so you can interact more purposefully. But that’s what Twitter lists are for. Generally, when I see someone who has a highly disproportionate number of followers compared to those they’re following, I write them off as egotistical and elitist. Of course, you shouldn’t follow everyone who follows you, but if someone tweets content that’s relevant to your industry or otherwise shows some merit, acknowledge their value with a follow.

“Protecting” tweets –  I get it’s a privacy thing. But I’m not sure why anyone would join a social networking platform like Twitter, and then hide the content they’re sharing. Assuming you’re on Twitter to connect with more people and extend your reach, you’ll want to share your tweets so others can decide whether or not you’re someone they want to follow. While I suppose it’s possible you could use Twitter as a way to communicate only with a select, private group of people, other platforms are better suited for that (Facebook groups, a private G+ circle, email…)

Automating Direct Messages – Why do people do this?? There’s no shortage of blog posts dedicated to the topic of how much people despise auto DMs. For example: Nobody Likes Your Auto-DM, Death to the Auto DM on Twitter, 4 Reasons to Abandon the Twitter Automated Direct Message. I’m in the camp of folks who find auto DMs annoying, impersonal, disingenuous, and typically presumptuous (many take the leap that because I followed them, I’m game for a sales pitch or would gain by liking their Facebook page). While I don’t unfollow everyone who sends an automated DM, I know people who do ax anyone who puts DMs on auto-pilot. Seems the risk outweighs the unlikely reward, so why take the chance. Put the stops on that auto DM now.

If you do any of the above, I mean you no harm or disgrace. What works for – and makes sense to – each of us on social media can be vastly different. You’re entitled to do whatever you want with the Twitter account you maintain… and there are surely things I do that make you go “Hmmm….”

Your turn! What Twitter practices are your pet peeves?

2 comments on “Things that Make Me Go “Hmmm…” on Twitter”