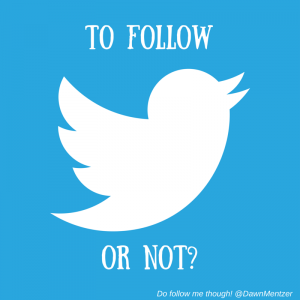 I had a blog post in draft form centered on one reason not to unfollow people (more on that later) on Twitter, when Mike Sansone (founder of Small Biz Tracks and Converstations) published his METHOD: Before Following on Twitter post.

I once saw someone, somewhere make a statement to the effect of, “When you follow everyone, you follow no one.”

That’s true. When you follow all the people and businesses you encounter on Twitter, you’ll have difficulty actively engaging and building relationships with any of them effectively.

That’s why it’s important to at some point become more selective about whom you follow. A method like Mike describes for evaluating accounts before you follow them can nip that problem in the bud.

If you’re like me though, some of the damage is already done and you’re following a fair share people and companies that don’t tweet updates that align with the topics you’re interested in or that you’d want to share with your following.

Regardless of the reasons you followed them (they’re local peeps, friends of friends, or you simply wanted to be nice), you can get around letting them crowd your feed by using Twitter lists. Put all your important contact and quality content creators onto meaningful lists and using a tool with a dashboard that lets you easily monitor your VIPs’ activity. I use Hootsuite for that purpose and it has worked quite well. I’ve written in more detail about this technique in this past post, so have a look.

Following Mike’s advice from the get-go is ideal, and using the trick I just explained after you’ve carefully selected who to follow can empower you even more.

Back To “Following” My Original Thought About Unfollowing On Twitter

As Mike explained how to choose whom to follow, I’m going to touch on one reason why you shouldn’t unfollow someone.

Don’t unfollow people simply because they haven’t followed you back.

Tools like Just UnFollow, Manage Flitter, Tweepi, and others make it easy to identify those people and unfollow them, but by doing that you could be missing out on some really great content and insight

Before you unfollow people, put your ego and hurt feelings aside and use the same review process that Mike described when deciding about following folks in the first place. If they pass that test, they’re keepers even if you’ve either slid under their radar or they’re not interested in following you at this time.

What methods do you use when deciding whom to follow—or not follow—on Twitter?